You are here: Home / Parenting Blog at KidsAintCheap / Money and Finances / 7 Watches That Make Nice Anniversary Gifts for Your Husband 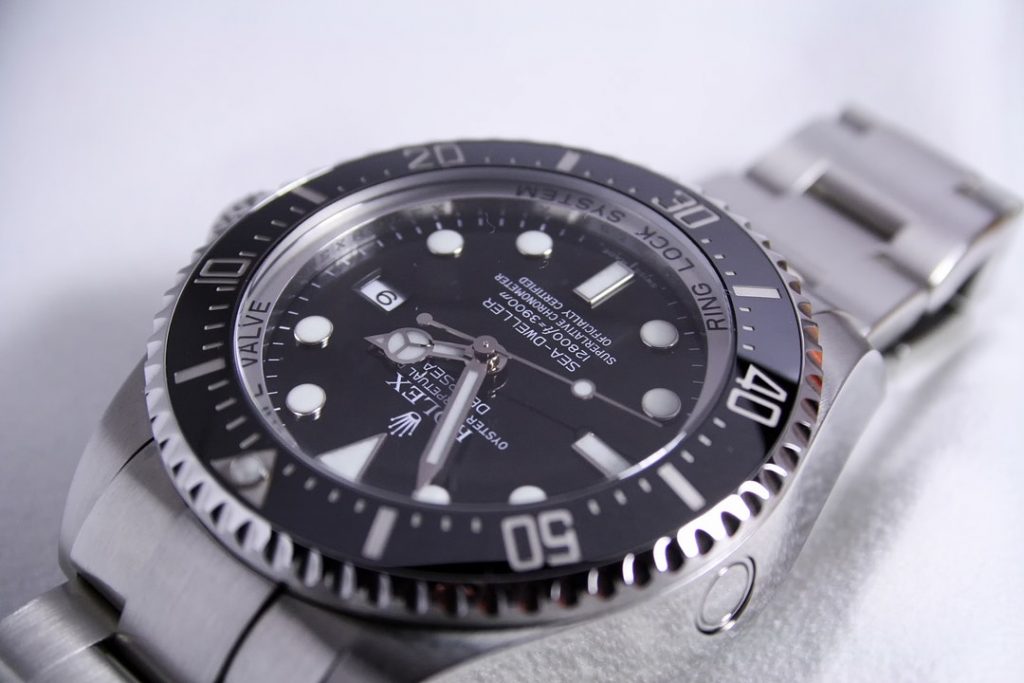 Benjamin Franklin once said, “You may delay, but time will not”. Are you procrastinating over what might be the best anniversary present for your husband? While the gift of time might be what he most needs, he may have to settle for a beautiful watch.

A watch makes a wonderful anniversary present but there are so many to choose from. Which one is right for your husband? Here are 7 watches that’ll make nice anniversary gifts.

Choosing a watch as a gift really starts with deciding what your budget is. Consider the watches made by Patek Phillippe. They combine the genius of Swiss watchmaking with aesthetics inspired by the planets and the night sky.

Patek Phillippe watches have been known to sell for $24 million. That was a rather special example of a pocket watch, the Supercomplication. If that’s out of your price range there are lots of less expensive astronomical watches available.

Compared to Patek Phillippe, Rolex is less expensive but it’s still a very respectable watch by a Swiss maker. It’s the most famous Swiss watch and worth the splurge because they rarely lose their value.

It’s bling-appeal is appreciated by business types and hip-hop artists too. If you can spare a few thousand dollars on a gift for your husband consider this iconic brand.

The Bond association adds character but what your husband will appreciate about the gift of a Rolex, is it works as a diving watch. Good to know, even if he doesn’t dive.

Ok, so Rolex is still a little out of your reach. It’s time to think about function rather than a reputation for craftsmanship. Casio does watches with so many functions your gadget guy is going to love his anniversary gift.

It has multiple displays including a compass, altimeter, thermometer, and barometer. It’s atomic timekeeping and solar power are impressive too. Good to know, if your husband does take up scuba diving, it is suitable for that too.

The Swiss Army knife has a worldwide reputation for quality and function. It’s an object of desire for many a boy, and if they’re honest many a man too. The Swiss knife maker also makes Swiss watches.

The Swiss Army knife is especially famous for having multiple functions, all build into the one knife. Victorinox has taken this concept and applied it to the challenge of designing a watch. At the same time, they have retained the quality look and feel of the knives.

Choose the Chrono Classic for a gunmetal dial or the strangely named “I.N.O.X” for a striking yellow dial and water resistance to 200 meters.

For the height of fashion, elegance, and style there are few to excel like Emporio Armani. The clothes are immediately identifiable even without a label. That same elegance has been successfully applied to watches.

Imagine your man, dressed in a smart Armani suit, with you on his arm. You’re crossing a marbled Italian piazza about to dine on exquisite Italian food in an elegant restaurant. He checks if you’re early for your reservation with a glance at the Emporio Armani watch you gave him.

Italian style is legendary and Emporio Armani has managed to include functionality with simple elegance. A white-faced model, with a tan leather strap, works well. It’s modern, even industrial, chic with the organic texture of leather.

If your husband is a little unconventional, perhaps he will appreciate a watch that doesn’t fit the conventional mold. The Invicta doesn’t have a Swiss movement. It’s Japanese.

The model to go for is the Speedway Professional. It evokes the excitement of the speedway racetrack. All mud and engine oil.

But this isn’t a rough looking watch. It has plenty of dials and functions but it also has a stand out feature. It’s decorated with lashings of rose gold plating.

If your husband already has rose gold jewelry such as rings or chains, a watch that coordinates is hard to find. Here is the perfect solution. It has a rose gold bezel, screw-down crown, pushers and even the dials on the face are rose gold.

The Citizen Eco-Drive is distinctively rugged. It’s fueled by light from the sun or even your room light. A great survival tool.

If your husband likes the outdoor life this may be the watch for him. It works well for camping, hiking and even boating. The water resistance is as much as 200 meters which should be OK for most boating needs.

The Eco-Drive comes in a multitude of styles including dressier versions. What they all share is that they never need to have their battery changed. This is because they don’t have a battery.

Citizen is not one of the prestige brands like Rolex or Patek Phillippe but they have their niche. This is a lower cost watch made with an eye on quality and value. Perhaps a realistic anniversary present purchase.

A watch makes a nice anniversary gift for any husband. Whether they are a fashion victim or a practical outdoors type, there’s a watch for them. The real beauty of a watch as an anniversary watch is that it’s something your husband can wear every day and it will remind him of you too.

Think about what your husband likes to do. Imagine him wearing the watch doing his favorite pursuit. Which watch do you see him wearing?

Raise money to buy your husband an anniversary gift using these ideas.