You are here: Home / Parenting Blog at KidsAintCheap / Random Musings / I am Home; Where is My Lightsaber! 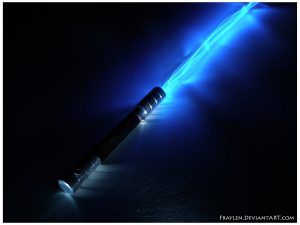 Last week I went on a business trip to Chicago.  I was gone for a full 7 days and the schedule and work load was absolutely brutal.  My wife travels quite a bit for work but it’s rare that I do so when I am gone for such a long stretch, the kids just freak out.  They don’t know how to deal with it.  It’s kind of odd that it’s mommy that they usually want but they deal with her being away much better than they deal with me being away.

Last year when I went away on a similar trip, I found these little plastic lightsabers that light up and brought them home as “prizes” for my two boys.  I made the mistake of using that trip as a reference point when I explained why Daddy was going away and what I was going to be doing.  I started the conversation off by telling them I was going away and saying “remember when Daddy left last year and came back with those two lightsabers?”.  Their first comment was that they remembered and those lightsabers broke because they played with them too hard.  They had sad little faces until the light bulb finally went off and they realized I was going to the same convention again this year.  Suddenly the sad little faces got happy and they started yelling that they were getting new lightsabers.  From that point on I could have told them I was going to China for 6 months, it wouldn’t have mattered, visions of lightsabers were dancing in their heads.

I created a monster!

I split up the drive out to Chicago to two days because we (me and one of my employees) weren’t able to leave until the afternoon of day 1.  At the end of  day 1, we stopped at a hotel and I called home.  First thing out of Sean’s mouth was “did you get our lightsaber yet!”.  I had created monsters!  They were more concerned with their potential prizes than they were they I had gone away.  Oh well, it was still pretty cute and once we got past that, they were genuinely excited to hear from me.

The rest of the week started off the same way but something really sweet happened half way through.  By the time day 4 rolled around, all they wanted to do was talk to me, find out what I did that day and tell me what they did.  It was really sweet and it made being away from home both easier and much more difficult.

When I finally returned home brandishing their brand new lightsabers (among other things) their first question was “Did you get us a lightsaber” and the second question was “did you get us anything else”.  Haha, oh well.  Finally by the third or fourth question they started asking me about my trip and how I was and their true excitement to see their daddy home started shining through.

Do your kids expect presents when you go on trips?