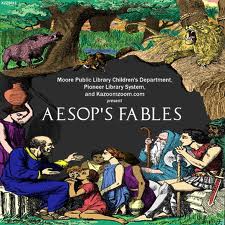 I love the simplicity of Aesop’s Fables.  They tell a tale most of us can relate to in just a few sentences and typically feature the animal kingdom as the primary characters.  They are morality tales that were used to help teach children right from wrong.  They are very old which makes them even more special.  It’s amazing that no matter how advanced we become as a society, something from ancient Greece is alive and well and still being used to teach our children right from wrong.

The story behind Aesop and his fables

For me, the story behind these fables gets more and more impressive and increases my enjoyment of them.  Aesop was actually believed to be a slave when he wrote his fables, he lived in ancient Greece between 620 and 560 BCE.   Aesop’s fables were a spoken tradition, handed down throughout the generations until years later when scholars collected the stories and put them down on paper.  There are some doubts as to whether Aesop was the originator of these fables and there are similarities and connections with both India and Ethiopia.

I am no expert on the subject, what I know about Aesop doesn’t extend any further than what I have just written but I am a big fan of his fables and do use them to try to teach morality to my children.

Every so often I am going to share one of these fables with you on this site and tell you what it means to me.  I would love to hear what the individual stories mean to you.

Do you like Aesop’s fables? Do you use them as a teach tool?