You are here: Home / Parenting Blog at KidsAintCheap / Growing Up / Will Having Another Baby Be Cheaper the Second Time Around? 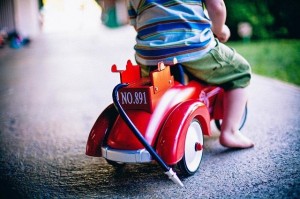 In the last few months my husband and I are coming closer and closer to the conclusion that we will likely have another baby. Not for a few more years but if we have any control over the situation we would like to have another. More for the fact that we want our daughter to have a sibling. Both my husband and I are very close to our sisters and we want our daughter to have that relationship too. Though not the only reason, a big reason we’re choosing to wait to have more kids though is that kids aren’t cheap!

I really don’t think kids have to be as expensive as some would make them out to be but they’re still far from free. The two biggest expenses we need to consider is me being on maternity leave for upwards of a year (and losing some of my income) and daycare.

Ideally we have another child at the same time our older daughter is preparing to start school. Once our daughter is in school she will no longer need full-time care and likely just a few hours in the afternoon until my husband and I are off work. This will save us hundreds of dollars a month for her current daycare cost. Having an older child in school while the younger is in daycare will definitely be the cheapest option in terms of saving on daycare costs initially.

As we come closer to preparing for me to be on maternity leave our monthly budget will look much better as we will have a significant amount of debt paid off as well. The peace of mind that comes with not having additional debt payments while on a reduced income will be great!

Most of the toys and baby items we bought and received as gifts for our daughter were very gender neutral which will save on upfront costs (and even if they’re not I have no issue with my potential son playing with his older sisters pink toys). There are very few baby ‘’items’’ we would need if we have another child. If we have a son we would need some clothes (most second-hand) as our daughter’s wardrobe is very girly and I draw the line at riding her pink motorcycle.

If possible, I will breastfeed again saving on formula and because we already own a pump and storage bags I wouldn’t need to re-purchase these.

Other than things like new savings account for post-secondary which will come with any future child, the other costs will be very limited. We will eventually need a second bed for him or her and some clothes, but because we have chosen to keep all of our current child’s things there is very little we actually need. Paying off our debt will also ensure I have a stress free maternity leave!

Did you spend less on your second baby than you did buying things for your first child?