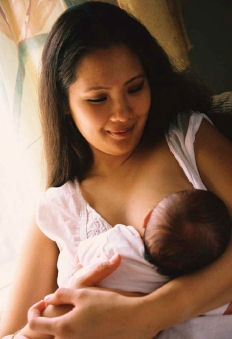 Let me explain that here in Nova Scotia it is a human right to breastfeed where ever and whenever a woman chooses to (although it makes me sad when stories like this continue to arise). This human right is not only backed and supported by our health department, but very much publicly encouraged; this is where an even bigger issue presents itself. One sector of our health department is telling her, and all women, to breastfeed anywhere and everywhere while another sector is conflicting telling her to breastfeed privately and not at her place on employment, a restaurant.

As a mother who has exclusively breastfed my baby for over six months now I have to commend this woman for continuing to breastfeed her son at eight months while working full-time, running a successful restaurant. Breastfeeding on demand is no easy task especially if you have work to get done. Breastfeeding mothers will tell you they very quickly learn to become excellent multitaskers. If we were forced to sit and hide in private every time our child needed FOOD we’d spend more than half our child’s waking hours cooped up in our houses, getting nothing accomplished.

In terms of this particular article- she was clearing a table at the restaurant she owns while breastfeeding her son. WHY DO WE CARE?!

Someone argued that it would be weird to have their groceries rang in buy a cashier who was breastfeeding at the same time. This isn’t even remotely close to the same thing. She is the owner of a restaurant who comes and goes throughout the day. She happened to have her son with her, he happened to be hungry, and she, at the same time, saw an opportunity to help her employees by clearing a table for them. It’s not like she was waitressing while breastfeeding juggling her pad of paper in one hand and baby in the other. She was lending a hand, multitasking, while popping into her restaurant.

Source: Ali and the World

In a society where it is perfectly acceptable to have nearly naked women displayed in our shopping malls, on billboards and on TV, I have a hard time accepting that there is still any issue with breastfeeding in public places. When a baby is latched on and nursing, you see less breast than most popular low-cut women’s shirts yet it is still labeled as disgusting or thought it should be done in the privacy of your home only.

As a fellow breastfeeding mom, I can testify that we find ourselves doing so many things while breastfeeding our child literally becomes an extension of our own bodies, we get to a point where we don’t even notice them. I am certain that this was the case here.

The issue I have isn’t so much that the health department went to her restaurant, they have a public responsibility to check all complaints, the issue is that a complaint was even made.

What are your thoughts?