You are here: Home / Parenting Blog at KidsAintCheap / Holidays / Is Black Friday Worth the Hype? 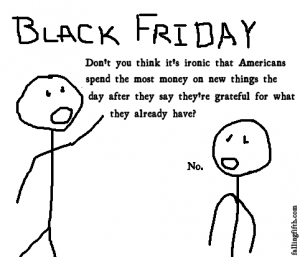 I have ventured out on Black Friday a time or two. The first time I ever did this was during the Furby craze! These annoying little robotic toys were all the rage during Christmas season 1998 or 1999. I didn’t have children at the time but one of my BFFs did. These chatty creatures were in such high demand that each customer was only allowed to purchase one at a time — and my friend had two kids. I thought it would be fun adventure to get out there with all the other bargain hunters — plus, I wanted to help my friend. So we met at a department store at 3:30am the day after Thanksgiving.

For those of you who are avid Black Friday shoppers you are probably thinking, “What? 3:30am? You must have been at the back of the line!” The rest of you are probably wondering, “What the heck were you thinking?”

Well, we got our Furbies but it was pretty wild out there. My friend and I made our Black Friday outing an annual tradition for about 4 years. I think the only other super great deal we got was a Barbie Dream House for her daughter, which was normally $100 and I think it was on sale for $40. Even though we were far from the front of the line we got it and it was worth it — her daughter was thrilled on Christmas morning.

Is Black Friday really worth the hype?

For many people the answer is yes. For me? The answer is yes and no. Sure there are great deals to be had but you have to to get up ridiculously early to even have a chance at some of the hottest items. I’m not saying you won’t save money because you will, as long as the items you go out for are still in stock by the time you get there. Retailers leure you into their stores with promises of crazy low prices on specific items but they usually only have a few of these items in stock. So let’s say that you see a 32″ HD TV advertised for only $99.  If you are one of the very first people at the front of the line you have a good chance at getting this item. The bad news is, you may have to skip the pumpkin pie to start standing in line before the sun even sets on your Thanksgiving Day.

Online retailers take notice of Black Friday sales and the folks at Amazon.com are constantly dropping their prices to one up other retailers. So if you don’t want to wait out in the freezing cold or throw elbows with the big boys and girls, you might just want to start shopping early and do some research so you can find the best deals on and offline. Another great thing is that a lot of stores today will price match competitors if you have the ad with you. This can help save you time and money.

Now for the record I’m not saying shopping on Black Friday is a bust. I do like to hit the stores after I have slept off the tryptophan from the day before and had a few cups of coffee. I usually get out around 10-11am. By this time the crazy has settled and there are still a few Early Bird Specials to be had.

If you do want to venture out:

Look at the ads and decide which stores and what deals you want to take advantage of. Write it down!

Bring those too. There are often retail coupons, which you can find online that can be used in addition to sale prices but read the fine print just to be sure.

Don’t take it too seriously

Have fun! Make a plan to shop till you drop, then meet friends for breakfast or lunch. This can help you de-stress. Plus, it’s fun to compare deals.

What do you think about Black Friday? Are you a die hard shopper or do you stay away from the stores as much as possible on that day?