You are here: Home / Parenting Blog at KidsAintCheap / Growing Up / 3 Life Skills Every Child Needs To Learn 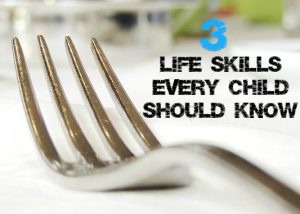 With a two year old at home I won’t have an empty house for a number of years but that doesn’t mean I’m not thinking about the skills she will require to be a self-sufficient young lady when she does eventually leave.

A kid I know is getting ready to move out in a few weeks and I’m fairly certain he couldn’t boil water if his life depended on it. Though he is brilliant academically he is seriously missing main life skills. Something I hope to avoid with my child.

They don’t necessarily need to know how to whip up an apple pie from scratch but they should know how to confidently prepare a few key heathy recipes. Getting children involved in the kitchen at an early age is a great way to instill their skills. Though having my two year old cooking with me sometimes can be extra time consuming and messy she is having fun and learning some basic skills.

There is a difference between tidy and clean. If kids clean it usually involves tidying and putting things away. Though this is a good start, by the age of moving out, kids need to learn how to appropriately clean. The nitty-gritty of getting and maintaining their space clean. They need to know how to effectively clean things like toilets and ovens. Too many of my peers don’t bother to do things like clean the bathroom taps, it just gets yucky!

This is a skill everyone needs to know but before your child is sent out on their own, they need to know how to budget and control their money. I have seen (and experienced) too many cases of mismanaged money simply because they didn’t know what they were doing.

If they’re ready to move out and control their own finances they need to know how to do it! Money skills are something that are learned and built up over time but even if they’re not it’s never too late to teach them! Establishing open communication about money is necessary too. Let your child know they can come to you for help if they need to. It’s much easier to help them in the beginning and help get them back on track then find out they’ve racked up a ton of debt and are in over their head.

Life skills are something that are established over time. Sometimes we as parents get so worked up in things like making sure they succeed academically or make the team that we forget the importance of very basic skills, skills that will take them very far in life!

How are you preparing your children for moving out?