You are here: Home / Parenting Blog at KidsAintCheap / Money and Finances / How Long Can We Maintain Being a One Car Family? 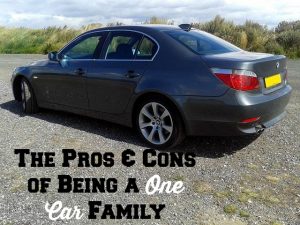 When my husband and I moved into our first place, a nice one bedroom apartment, our lease stipulated one vehicle included, anymore and we would have to pay extra for an additional parking spot. Given that we were looking to save as much money as possible for our upcoming wedding, we decided to sell my little old car.

My husband had the more reliable vehicle and I opted to use public transportation instead of paying extra just to park my car. I work in a downtown core where parking is incredibly expensive as well so driving to work is quite the added expense, selling our second vehicle made sense for so many reasons.

Fast forward six years and we’ve been married, moved into a suburban home and had a baby. My job is the same, my husbands has changed slightly requiring more frequent out-of-town day trips. I’m still taking public transit which, to give our city some credit, has improved in the last six years. Though I thought it would be a temporary thing, six years later we’re still a one car family.

The only way this is possible is me either taking public transit or carpooling on some days. Though I could drive to work faster than me taking public transit I simply cannot justify this added cost right now. Monthly parking at my jobs location is $150 per month. If we bought a second car, not only would we have the upfront cost of the vehicle, we would need to pay for gas, maintenance and insurance. Even without paying for parking it would still cost us about $250 per month to own said car. With parking and bridge tolls, closer to $500.

I currently pay about $60 per month for public transit, a significant savings from the $500 we could be paying!

The inconveniences of being a one car family….

The biggest inconvenience we’ve encountered with being a one car family happened two years ago when our public transit went on strike. We ended up spending more than double our gas (almost $400 per month in gas) with my husband driving me to work everyday or us giving gas money to other people for me to carpool with. The strike lasted months and was a huge headache to deal with. My normal 30 minute driving commute was upwards of two hours some days with the sharp increase in vehicles on the road.

As our daughter gets older we’re expecting a few more inconveniences as she gets involved in activities and needs to be at places. Given that I now rely on my husband to pick me up from a major transit depot close to our house, if he needs to have our daughter (dance or soccer) at the same time we’ll be in a  tough spot with me trying to get home. My work schedule is very rigid and can’t easily be changed so I foresee this being a challenge.

We’re lucky that we currently live in an area with public transit, I suspect our next home will be out of the city and away from major transit lines where owning two vehicles will be a necessity given our work schedules.

At this point in our lives, being a one car family works. We’re ”saving” almost $450 per month. Money we just can’t justify when we’re working to pay our debt off. Once our debt is paid off we will likely get to the point where having a cheap second car will be a necessity either because of where we live or the direction our lives takes us.

Are you a one car family? How is it working out?