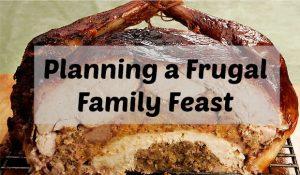 This weekend I will be celebrating Canadian Thanksgiving by spending time with my family and stuffing my face with turkey and pumpkin pie. There’s something about Thanksgiving that I love. I think it’s the family gathering that isn’t already around another busy holiday such as Christmas or Easter, or maybe it’s just the fact that we get pumpkin pie, regardless, Thanksgiving is one of my favorite times of year.

Depending on where you live putting together a family feast can get very expensive. By the time you factor in meat prices, dessert and all the fixings, costs add up quickly! Today we will talk about how you can have a family feast without breaking the bank!

No where does it say your family feast has to include a turkey, ham or ”turduckin”. During Christmas, we would traditionally have a large family turkey dinner on Christmas eve after mass. Over the years though the family began to grow, a lot. Through marriages, new relationships, births and friends what started at three people blossomed into many, many people. Asking my mom to cook a turkey dinner large enough for everyone would have got very expensive, during an already expensive time of year.

Instead, she decided to skip the meat all together. A few years ago she decided to take a poll of everyone’s favorite pasta dish. A big winner was fettucine alfredo, so that year instead of turkey, she made a huge batch of pasta. Even buying all fresh ingredients from a specialty store, it was substantially cheaper to make pasta than it was to make a large traditional meal involving meat and everyone enjoyed it.

If you’re hosting a family feast, divvy up the cooking responsibilities. Especially if you provide the meat, there is nothing wrong with asking each of your guests to bring a dish that accompanies the main course. To make sure you don’t get repeats, you tell them what to bring or you may end up with five versions of potatoes and six pies.

For Thanksgiving dinner, where will we have approximately 20 people to feed. Hubby and I are on ”dinner roll duty”. His granddad will be making a turkey and every family member has an item to bring to the meal from dinner rolls to pumpkin pie, we all know our dish.

I was going to bake a pie to bring in addition to the dinner rolls we were required to bring. My baking supplies are dangerously low so I knew there would be quite a few ingredients to buy. I went and priced out the ingredients to make my pie given what I had and it was going to cost me almost $20 to make from scratch, about $10 less if I bought a pre-made crust or $4.50 total if I just bought a pre-made pie. While people would have appreciated the effort and taste of my delicious pumpkin-apple pie, I simply don’t have the extra room in our budget this month for $20 in baking supplies. The store-made pie will be delicious, I’m sure, especially with a $4.50 pricetag.

So much about large family meals are more about spending time together rather than the food itself. While traditional meals around meat may be the norm, don’t be afraid to try something new. At the very least, new memories will be created.

How do you cut costs with family gatherings?