You are here: Home / Parenting Blog at KidsAintCheap / Money and Finances / How to Save Up For a Downpayment When You Have a Family 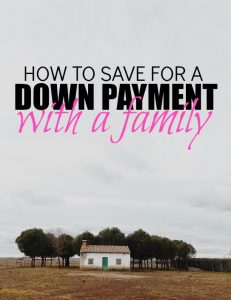 Homeownership is a huge goal for many people.

Given the many expenses that come with having a family, it is often, though not always, a goal that is easier to obtain before kids come into the picture. Just because you have a family before homeownership doesn’t make it impossible though, you just need to get creative when it comes to saving for a downpayment.

Get a Second Job

When you have kids, this can be difficult but if money needs to be made this is the simplest way to do it.

A friend of mine growing up always rented an apartment with her family until one day she told me her parents finally bought a house. Her dad had been getting up at 4am Monday-Friday to deliver newspapers. Though he hated the hours, he reaped the benefits when, two years later, he was able to buy the family home he has always wanted with the income he earned from his second income alone.

With kids comes stuff, and lots of it. After three years of collecting stuff for our kiddo I’m finally at the point of realizing some of it has to go. I had grand ideas of holding onto a lot of it in case we have more children but I’ve come to the realization that if we do have more kids they will likely get stuff too and then we’ll have multiples of things.

If things are kept in good shape you can get a decent return on money spent. By taking care of kids items and reselling them you can start a decent savings goal for that downpayment account.

Whatever your current living situation, if it’s possible, downsize. Maybe siblings will have to temporarily share a room or you’ll need to get rid of some things for the move but short-term pain for long-term gain may definitely apply here.

My co-worker sold their house and moved in with her in-laws for six months to save money. In six months alone the managed to save $15,000 since they were able to live rent/mortgage free and no utilities. The mother-in-law insisted on no money but instead they paid for all the groceries while living there. Though she hated every second of living there, without doing so it would have taken her almost 24 months for the same goal.

Make it a Family Goal

If your kids are old enough, involve them in the plan. Explain to them what your goals are and why things may be changing to reach the goal. Maybe cutting out a summer camp or a dance lesson will be required to meet the downpayment goal but in the end the whole family will benefit and they need to understand this.

Homeownership can seem like an impossible goal to reach but with a little extra effort and family commitment, it is possible, even after the financial responsibility of kids creeps in.

Did you buy a home after your kids were born? Did you need to do anything differently?