You are here: Home / Parenting Blog at KidsAintCheap / Holidays / Saving Money This Halloween 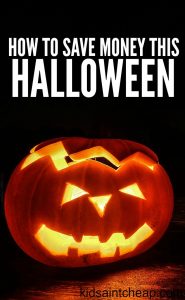 Like most holidays, Halloween can be expensive. For us, the costs are split between costumes, decorations, candy to give out and stuff to make for our daughters Halloween party at daycare. I was hopelessly optimistic that we could accomplish all of this for under $30. Boy was I wrong.

To start, the cost of candy was significantly more expensive that I remember (even from just last year). I want to be prepared for at least 100 kids and a box of 50 candies was coming in at $15. Half my budget. I accepted we would be over budget so I did what I could to re-coop costs in other areas.

I was happy when our daughter announced she would be a princess and wear her favorite pink dress-up dress which we already owned (on clearance last Halloween so scour those racks this November!). The only request she had was that she wanted ‘’princess gloves’’ which my husband found for less than $5.00.

If you don’t already own the costume that you require, look into making it. Making it isn’t always cheaper though, especially if it requires a lot of items you don’t already own, but look into materials cost as a start. Also consider time to make the costume. Another option is to look online or second hand stores for used costumes. Costumes are often only worn a handful of times and usually in pretty good shape.

If you know someone you could borrow from, this is also a great option.

Use the Dollar Store

I love the dollar store. Especially when I’m preparing treats for my daughters daycare parties. I admit to spending too much time admiring what others accomplish on Pinterest but when you’re working full-time, and the party falls within the workweek, time is limited. For less than $10, I was able to buy everything I needed at the dollar store (as well using a few pieces of candy we had already purchased) to make up little treat bags for a handful of toddlers.

The dollar store was also where we found the crown and jewels for our daughters princess costume.

I wouldn’t decorating at all if it was up to me, but my daughter wanted to know why we couldn’t. She would ask every day if we could decorate ‘like they did at daycare’, and like her Auntie does. I was about to give in and head to my local dollar store for a few items (I was a kid once who loved to decorate for Halloween too) but thankfully my Halloween-obsessed sister-in-law had some extra stuff laying around which we could borrow for free!

Unless you love Halloween more than some people love Christmas, don’t spend too much money on decorations. If you enjoy a few decorations buy a few that you can reuse rather than one-shot deals that you’ll throw out.

Halloween can be a fun but like anything, busting your budget is never fun. In the end we ended up spending closer to $50 on Halloween this year, an amount I know has the potential to be much higher in years to come.

How much will you spend on Halloween?