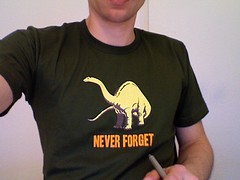 My youngest son is a big Batman fan and where I work, I can get him Batman t-shirts for half off so he has a bunch of them. His older brother, despite all of my attempts, is just not into superheros but he LOVES dinosaurs. He is completely obsessed with everything dinosaur related. Almost every morning, he is disappointed in the clothes I pick out for him because he only has one dinosaur t-shirt. He wears it the day it comes out of the wash and then it’s in his hamper for a week so he is happy with his clothing choice one day a week. Oh the troubles of a 5 year old.

Where to buy dinosaur t-shirts

Now that it’s getting hot out I am determined to increase his dinosaur wardrobe. I came across a pretty comprehensive list on another blog of Dinosaur T-Shirts for Kids and Adults. The first one is the one he already owns, Santa brought it for him this past Christmas but that’s it, he doesn’t have any of the others. We don’t have a lot of money as I have highlighted on this blog before and these shirts are more expensive than most of the clothes we buy for the boys (we go to consignment shops and big box stores mostly). However, he was so excited at the thought of getting a few of these that I just can’t deny him. We are going to get him 3. We were going to buy him one a month for the rest of the Summer but it’s cheaper to get all 3 now and save on shipping so that is what we are going to do. Once we get them I will do a review of a few of them.

P.S. – We ordered them today and Harrison has already asked me twice if they are here yet.

Where do you get themed clothing for your children?