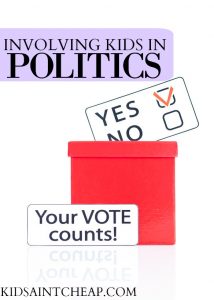 Money and politics tend to be two topics that people hold tight to the breast. They often don’t like talking about them, which to me is sort of funny. Both of these topics are so, very important and in my opinion you can’t talk about them too early or too much.

I write this post on the eve of Canada’s federal election and the US will elect a new president in a years’ time. Growing up in a democratic country is a blessing that enough of us, unfortunately, don’t realize. I want my children to understand the importance of having at least a basic understanding of our political system, international effects and why they absolutely must make an educated vote, for any election.

I only have my own experiences to draw on, and in terms of politics, I had very little exposure as a child. This probably has something to do with the fact that the voting age in Canada isn’t until 18 years old, when most people have either graduated or are in the process of graduating high school. I’m sure the mentality is that once you move onto post-secondary education systems it will be discussed but that wasn’t the case, for me at least. I wasn’t a political science student. I didn’t study economics or history. I literally had to Google my own politicians and what the parties meant and represented when the first election happened. Unfortunately most young people don’t even bother to do this and thus, don’t vote.

The US system is much simpler in the sense that you have Democrats and Republicans, as well a set election schedule. Canada has multiple parties (bigger ones being Conservatives, Liberals and NDP) as well no set election schedule, we could essentially have the same prime minister for 30 years. Boring.

Teaching our children through involvement is crucial regardless of what country you’re from. We’ve already started with our 3.5 year old. When we’re driving we have her point out the different colored signs. She knows which one mommy and daddy prefers and is beginning to engage in questions. The ‘’why’s’’ have started. While I know she doesn’t necessarily understand our answers, the point is that the conversation has been stimulated.

When we vote tomorrow we will bring our daughter with us. I want her to come and experience it. The TV will be on all night until the final results are in, she will watch it with us. I know she doesn’t ‘’get’’ it but it is important to us that she begins to appreciate just how important it is. I have a friend who will actually host an at home voting booth with her young children, this is a brilliant idea to me. Learning through experience is the best way to learn.

Having a good political background is so important, kids shouldn’t be excluded. They should know who stands for what and how they will be effected too. A time will come when they’re granted voting power and they need to have as much information as possible!

Do you/will you involve your children in understanding politics?