You are here: Home / Parenting Blog at KidsAintCheap / Books and Reading / Aesops Fables / The Frogs Asking for a King; an Aesop’s Fable

The Frogs petitioned Jupiter to appoint them a King to keep them organized and make them lead more honest lives.  Jupiter, who felt they needed no King, tried to appease them by casting down a huge log into the lake and declaring it their King.  The frogs, terrified by the splash the log made, hid themselves in the depths of the pool.  After a while, however, they noticed that their new ruler remained motionless, and they soon became brave enough to climb up and squat upon it.  After some time they began to think themselves ill served by the appointment of so tame a King, and they sent a second delegation to Jupiter, asking him to send another sovereign.  He then appointed an eel to govern them.  When the frogs discovered their second King’s easy good nature, they went a third time to Jupiter to beg that he choose a more suitable leader.  Jupiter displeased by their complaints, sent a heron, who devoured the frogs one by one.  The few who escaped asked Mercury to take a note to Jupiter asking for help; but Jupiter replied that they were being punished for their folly and that they should learn to leave well enough alone.

When you seek to change your condition, be sure you can better it! 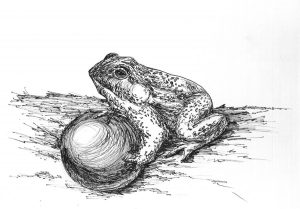 How would you use this fable to teach your children?