You are here: Home / Parenting Blog at KidsAintCheap / Holidays / Throwing a Frozen Themed Party on a Budget 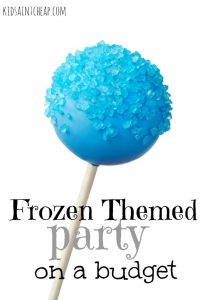 My daughter is ‘’into’’ many things, the biggest I can thank Disney for, Frozen. It was the first movie she watched and was actually engaged with. She loved it, especially all the songs. When it came time to plan her birthday party asking the question, ‘’what kind of party do you want to have’’ was a stupid question. We already knew it would be Frozen everything.

Disney is smart. They know how to market to kids arguably more than any other company in the world. She wanted everything we saw that was even somewhat Frozen related. Needless to say, if we were responsible for hosting over 20 people at our house for a party, we would need to keep as many costs down as possible, while trying to plan around Disney’s current hot theme. I’m happy to report that for less than $40 we were able to decorate to the theme of Frozen.

If you want to save money with a party you’re going to have to DIY some (most) things. Don’t let this scare you though. It can be easier than you think.

One of the biggest expenses for us in the Frozen themed items, was the cake. She wanted a princess cake but I wasn’t willing to fork out $40+ for a themed birthday cake. I toyed with two ideas in my head instead. I was either going to buy an undecorated cake from Costco (with only basic piping around the edges) and decorate it myself with some plastic Frozen characters and sprinkles we had at home or, what I ended up doing, making a cupcake princess dress for about $10.

Between my sister-in-law and I, we were easily able to replicate a ‘’cake’’ that was similar to this one. Tip- buy icing gel dye (usually less than $2 per color) over food dye as it works much better to get the color(s) you want. This was one of the most fun, and easiest, DIY party things I’ve ever done.

Decorations were also pretty simple. I found a local discount party store not too far from our house that had some Frozen things. It wasn’t all cheap (balloons started at $5.00 and went up to $15) but I did find a set of matching Anna and Else six foot wall decals for $5.99. These two decorations alone made our daughters day. She was super excited to see our wall literally covered in Anna and Elsa. I combined this ‘’main’’ decoration with some dollar store Frozen wall stickers and streamers and was done. I was surprised at how well it all looked.

Some of the food was Frozen themed as well. Again there were many branded food ideas out there but I opted to go cheap and practical. Along with the cupcakes for dessert we offered ‘’snowballs’’ which were powdered donuts and for a snack before the meal (a buffet style BBq) we had ‘’Olaf noses’’ to munch on (baby carrots and dip). Owing a punch bowl already, I threw some blue fruit punch, pineapple juice and 7-up into it and blew the kids’ minds with Frozen inspired punch.

I had every opportunity to go completely overboard with this Frozen themed party but we didn’t. While we did spend a bit of money feeding 23 people we had major savings with the stars of the party- Anna and Elsa.

Have you thrown a themed party and saved big?