You are here: Home / Parenting Blog at KidsAintCheap / Parenting / What Can Animals Help Us Teach Our Children 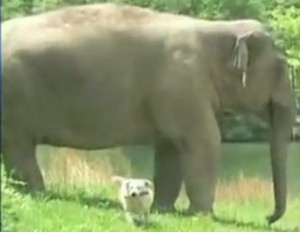 It’s important to me that my children grow up to be tolerant and accepting of others.  We have come a long way as a species but discrimination of all kids still runs rampant and will never go away.  I firmly believe that acknowledging that it will never completely go away is the first step towards teaching your children to love, respect and tolerate the differences around them.  There will always be people that pick on or dislike other types of people for irrational reasons.  Whether it’s because they see a weakness they can exploit, a difference that makes them scared, a color that they aren’t used to or a way of life that seems weird to them, people are always going to discriminate, sometimes without even realizing they are doing it.

So, how do we teach our children to not be discriminatory if we believe that sometimes these reactions are normal?  I think that is one of the reasons why I use the word “tolerant” because it seems like a reasonable goal.  It’s natural for people to react to other people in certain ways based on their experiences in life.  It’s natural for the small shy kid that used to get beat up by the giant guy down the street to be leery and want to avoid people that fit the profile of the giant guy that beat him up.  It may not be rational, just because one giant guy liked to beat up little guys, doesn’t mean they all like to but that doesn’t make the fear any less.  As a personal example, I am not small but I was the geeky awkward kid that got beat up and picked on and at the age of 34, I still get intimidated by people that remind of the bullies that used to pick on me in High School.  I believe, the key is to teach our children to understand this basic concept so when they get past their initial fear or discomfort, they can approach and treat the other person as another human being.  I am using a fairly generic example but the same concept can and does apply to sex, age, race, religion and cultural discrimination.

My kids are only 3 and 5 years old and I am delighted by the fact that they rarely notice differences in people.  They have friends of many different races and of both sexes and have never once appeared to have cared that their friends skin was slightly different.  I think discrimination is something we learn over time from our life experiences and from the people around us that influence our thoughts and guide us in life.

However, just because they have not yet reached an age where they have started noticing differences or acting/thinking about the differences they do notice, doesn’t mean we can’t start teaching our little ones about tolerance and respect for others.

Recently, I have turned to the animal kingdom to show my children two very simple lessons in creatures that couldn’t be any different yet they accepted and loved the other creature without question.  Animals are amazing for many reasons but one of the things you rarely see outside of the human species is that they don’t act cruelly towards others.  Sure, there is plenty of death in the animal kingdom but it’s for a purpose.   The two videos below warm my heard and make my kids laugh.  They show that differences don’t matter and instant connections are possible and wonderful things.

The Orangutan and the Hound

Do you have any more examples of tolerance from animals? How have you tried to teach tolerance to your children?