You are here: Home / Parenting Blog at KidsAintCheap / Holidays / Why I’m Asking for Cash for Christmas in Lieu of Gifts for My Daughter’s 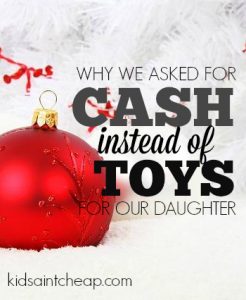 Christmas is fast approaching and almost every day I get phone calls and text messages asking about gifts for our daughter. Everyone wants to buy her something. Friends, grandparents, cousins, neighbours. She’s only two and half years old! There isn’t much of anything she actually needs and really she’s still too young to know if she wants anything. While we as parents can get away with it (i.e. before she’s old enough to ask for stuff) we’re asking that people limit or exclude physical gifts for her.

We as her parents take care of her wants and needs and I think we do a pretty good job. She has all her needs taken care of and more than enough ‘’extras’’ in her life in the form of toys, books, treats and special events. Selfishly I don’t want a house overrun with her toys and ‘’stuff’’ either. I think it’s important to keep the level of ‘’stuff’’ she’s surrounded with at a realistic level. While I accept that people like to buy things for her, she doesn’t need much and so I would rather have the cash instead.

With a cash gift, instead of another stuffed animal or doll, we can do more for her. First we could invest it her post-secondary savings account. I would much rather have $20 invested for the next 16 years than a toy she’ll play with for a few days which we’ll then end up donating or throwing away depending on its condition. We could also put it towards a special event or experience for her. This coming year we have plans to enroll her into a few dance classes for example. I would rather see her experience something new and exciting that can really help form her as a child than a simple toy she won’t have much interaction with.

I’m not a total scrooge. I understand that for her toys are fun and we will be buying her some new fun toys and books to play with but if I allowed everyone person who has inquired our house would be littered with too much stuff. Too much stuff can lead to unnecessary expectations for her too. I don’t want her growing up with extreme Christmas expectations either. Gifts, though fun, are not the main focus of the season.

In me explaining that we would rather have cash (and/or books) in lieu of gifts has been very well received by people who have inquired. Once I explained what our plan was and why we wanted to limit the volume of gifts she got people seem more than happy to give cash in her name instead (one less gift for them to buy too!). People loved the idea of contributing towards something much ‘’larger’’ in terms of post-secondary or experience such as her dance classes. I have also accepted that some people (aunts and grandparents) genuinely enjoy buying things for her and that’s ok, as long as they don’t go too crazy 🙂

It is too easy to go overboard this time of year. I don’t want people feeling like they need to get her anything and if they do I just want to give the option of contributing to something more.

How do you manage request and gifts for your children for Christmas?