You are here: Home / Parenting Blog at KidsAintCheap / Parenting / Keeping up with the Joneses (Parenting Edition) 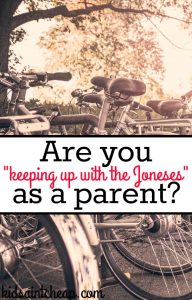 At the beginning of the year, my daughter started ballet. Halfway through the semester they have a public showcase which is a time where the families can see what is being accomplished in class and, as well a time for the students to get used to being outside of their studio and on a larger stage with an audience. By the time their annual recital comes around they’re a little more comfortable on a stage and know what to expect.

The showcase is not the full practiced recital with costumes and all. We were excited to see her dance though (parents aren’t allowed in the studio during weekly dance class to encourage independence/the studios aren’t very big) and she was excited to show off her moves. I was a little surprised to find out, that during this less formal performance, that parents would be bringing flowers to their kids. I didn’t know what to do.

For a formal dance recital performance, I understand that parents might bring a flower or small bouquet for a job well done and to congratulate their kids, but for a mid-semester quick showcase I wasn’t so sure. This was my first time so I was very much ‘’going with the flow’’. In the end, I decided that flowers for this day would be a bit much and were unnecessary, that was until I got a text from my sister-in-law.

Her friend has a daughter I the same dance company as ours. He called her to warn her that when they went to their first showcase they were literally the only parents without flowers for their daughter and it was nothing but tears for a few hours following. I didn’t want that to be us. I didn’t want to walk into the dressing room afterwards empty handed and have to explain in a roomful of pre-schoolers and parents that mommy and daddy didn’t bother getting flowers because they were a waste of money for such an event. We didn’t have time so our family made an emergency flower stop and picked up a small bouquet (50% off!).

This was the first time since having my daughter that I really felt like I was doing something to appease other people. Parents mostly. Don’t get me wrong, she was pretty excited to get a few flowers of her own, but I still feel like it was a bit unnecessary for the event in question. Had we not got the call from my sister-in-law, I would have stuck to my instinct and my kid would have been the only one (without flowers) and possibly spent the drive home crying, so in the end I’m glad we avoided that.

I’ve always very much gone to the beat of my own drum, and not cared what other people think about me, my family or any choices we make but I notice more and more that my thought process around my daughter to be more concerning with what other people will think. I think it’s partly because she’s not quite at an age to fully understand things. Sure we could have skipped the flowers and I could have attempted to explain that we only get them for recitals but she wouldn’t have really understood why she didn’t get any while everyone else did.

As she gets older and more understanding I think it will be easier to explain why we may do (or do not) certain things but for now I choose my battles.

Have you ever felt pressure to do something for your kids?