You are here: Home / Parenting Blog at KidsAintCheap / Parenting / Seeing The Emotional Side of Our Children 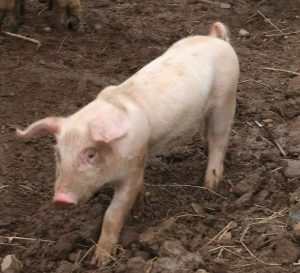 It has been a long week here. Hamilton the baby piglet has passed away due to a congenital problem. I received the phone call the other morning from my future son-in-law that something was wrong with “Hammy”. I jumped up and got dressed and my daughter was at work. We decided not to tell her right away because there was no need to upset her if it wasn’t serious.

The vet checked Hammy out and ran tests but sent us home to wait for the results. We told my daughter. Hammy was not getting better so we called the vet back and brought him back in. By the time he was rushed back the vet said to get him to Tufts Animal Hospital right away.

Death of a pet

To make a long story short I was home with my family and my daughter called me hysterical. Hamilton had passed away in her arms 15 minutes from the hospital. There was absolutely nothing I could do to help my daughter feel better. They went to the hospital because Kay had to know what happened and they told her it looked liked something he had been born with. They took Hammy home and asked if I wanted to be there for the burial. As you all know I helped raise him and I had to be there for the kids.

We are all still heartbroken. My daughter and her fiancé are still grieving. I received a phone call that night and this is exactly what was said to me, “Mom, I feel as though I have lost a baby and it shouldn’t hurt this bad.” My heart was so heavy and I was so frustrated because there was not ONE thing I could say to make her feel better.

Even her brothers ages 13 and 10 years were grieving. My 13-year-old son walked off on his own and just stared out at the river. He couldn’t deal with his sister and her fiancé actually crying. My 10-year-old son stayed close but I could tell he didn’t know what to do. He wanted so much to say something but had no clue what words to use.

When we left my daughters house and returned home we still needed to have dinner. My boys told me that they would give all of their money to K and C to help pay for the doctors for Hammy. My heart lurched again.

I have now learned that there are times when we will really have to watch our children hurt right from the core of their beings. And that there is nothing we can do to stop it but give them love and space.

Being a parent is so much work but seeing the love in my kids does make me so proud. RIP Hamilton, you will certainly always be in our hearts.

Have you ever experienced the death of a pet with children around?