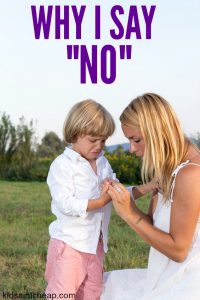 A few weeks ago Huffington Post shared an article about the Benefits of Saying No. Today I share my reasoning for telling my toddler ‘No’ more times than ‘Yes’, and why rewarding for good behaviour is foolish.

I bring my daughter everywhere. Unless it’s not appropriate, she comes with us most places. I have friends who plan all their errands around their spouses schedule so the ‘kids aren’t getting dragged around’ while they do things like get groceries or go to appointments. I get it, it’s usually a whole lot easier to do some tasks like grocery shop when you don’t have grabby little hands asking for everything, but to me these are important opportunities for my daughter to learn about the world around her.

I don’t believe in rewarding for good behaviour when good behaviour is expected. For us, I completely expect her to behave in a situation like grocery shopping. She does it so often with us, she knows what is expected of her. If we however brought her to a meeting at a bank and had her trapped in a tiny room for three hours, acting out might be expected. See the difference? Bribes and treats might be needed in the second scenario!

Just because she knows how to behave, doesn’t mean she doesn’t try to ask for things almost every time we go out though. The difference is that when we say no, she usually doesn’t push the issue. As each outing happens, there are fewer and fewer ‘incidences’. I honestly can’t remember the last time she put up any fight about hearing the dreaded two letter word.

Thanks to advertising, today while grocery shopping my daughter ran up and grabbed a massive container or Minions tic-tacs. She didn’t even know what they were, but wanted them because they were cute and yellow. Rather than freak out when I told her no, she said ‘’ok mommy’’ and put them back.

Over the many, many trips to the grocery store and running errands with us, she had come to learn that just because she asks for something doesn’t mean she will get it and this makes our life so much easier.

Every now and then we’ll buy her a treat but it’s usually on our accord and not when she asks for it. When we’re done errands I might suggest a treat of getting a donut for her and coffee for mommy. We’ll sit in and talk for a few minutes. I know she will enjoy this time together so much more than a random treat she eats in the car.

The stuff she wants is usually pretty cheap and harmless. Rarely does she ask for something that cost more than $2-$3. That’s not that point though. I want her to grow up understanding that she won’t get everything she asks for just because she wants it. Life isn’t that fair. Though I want my kid to have the world I want her to understand balance too and I never want her to feel like she literally has everything in the world she’s ever asked for, it’s totally unrealistic and unhealthy in my mind.

We enjoy giving special treats and surprises just as much as any parent does but by learning to say No more times than Yes, I really believe that she really appreciates things a lot more.