You are here: Home / Parenting Blog at KidsAintCheap / Money and Finances / Would You Buy a Home For Your Child? 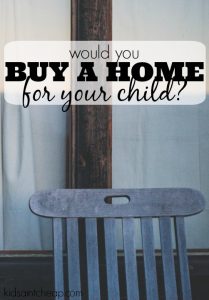 I work for a successful dentist. Part of his success definitely comes from his frugality which I admire. When most think dentist, they think big beautiful home, fancy cars, great work schedule and exotic vacations on a regular basis. While his house is nice, it’s large by necessity not lavishness, he and his wife have four kids and live well within their means. He’s been in practice for 30 years, still works five (long) days per week, by choice, until recently he drove a 16 year old van and when he does take time off it’s usually incorporating a little work with a little play.

He’s extremely modest, except when it comes to his kids.

I totally respect parents who can afford to put their children through school. While I don’t think it is the parent’s duty to do so, if you’re able to afford both putting them through post-secondary while taking care of your own long term financial goals, that’s great. What I can’t wrap my head around is parents who, beyond post-secondary years, continue to financially support their children. For so many reasons I think this is a terrible idea.

Should You Buy a Home for Your Child?

One of the dentist’s children is getting ready to graduate from university this month. He’s finishing with a degree in engineering and already has a job lined up with, what I’ve been told, is a good competitive salary- even better given he has zero debt to manage. He is in a much better position than most all of his peers that’s for sure.

Needless to say I was a little shocked to hear the dentist say he and his wife were considering buying a house for this son to live in, rent free.

Here’s the thing. The kid has already gone through life never having a ‘real’ job, he’s made money doing some sports coaching stuff casually but his only responsibilities were to do well in both school and sports, again given his upbringing that’s fine and I’m not judging, but continuing to baby him beyond university is setting him up for failure. It’s high time he takes care of himself.

If they were genuinely interested in investing in real estate in this city (second highest in our country), because they planned on living there or something, maybe I get it but the kid shouldn’t be allowed to live there rent free that’s for sure.

Thankfully the wife of the dentist spoke some sense in to him and explained where my head at is well, basically that it’s not their responsibility to provide for him anymore and instead are going with him to see a finance person about how he can save for his own place should he choose to stay there (he’s thinking of going back to school).

Though his children are well taken care of, they really do understand how fortunate they are and see how hard their father works to provide for them (probably why of the four kids not one went into dentistry). This story had the potentially to end tragically- like it does for so many families of parents to hold onto their kids way too long, but thankfully they came to their senses and backed out of the idea.

Would you buy your kids a house to live in?